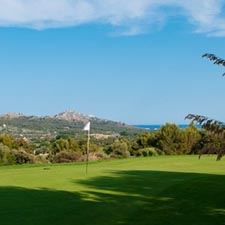 Located in Artá, in one of the most relaxing surroundings of the island. Expert and novice golfers will find an interesting course. It offers fairways with gentle slopes with water hazards as well as steeper ones from where spectacular views can be enjoyed.

The course combine wide fairways with more narrow ones. There are a few holes that require that the ball overflies the water hazard as the course has seven lakes. The first twelve holes are more or less flat and vary in length. The last six are narrower and seem to climb the mountains of Artá but gives you the possibility to enjoy the marvellous views over the valley of Canyamel, the village of Capdepera and the ocean. To complete the experience we recommend you to try the excellent food they serve in the restaurant on the clubhouse terrace. Nearby Golf Capdepera you find a small, cozy village by the name of Arta. Artá located in a valley, where a lot of almonds and olives are grown. Arta is a very old, small village, so old that no one is sure when the first people settled here. The city offers a great variety of historical monuments representing different periods in the Balearic prehistory, including dolmens, "navetas" (a type of tomb, built to resemble a boat with the keel up), Talaiotic monuments (Talaiot, also spelled Talayot, was a prehistoric culture between 1200-200 B.C on the Balearic island), burial caves and much more. Many of these are landmarks on the island, as they are of great importance in purely historical terms, and very unique. The Roman domination has undoubtedly also it left its track, and the name itself the village got during the Muslim era. Mallorca were divided into 13 districts, which Arta and its peninsula became known as "Yartân" which has led to the current name.

When Catalonia conquered Majorca people began to gather at the foot of the small mountain where the village was built. The people moved from the coastline towards the inland, as the danger of Algerian pirates were great. The village Artá combines traditional and historical architecture with modernity, but has escaped the changes that mass tourism have brought to the rest of the island. If you are eager to see the real Mallorca with deeply rooted traditional culture, then Artá is the right place to visit. Just be sure to not arrive here during the siesta. The most emblematic building in Artá is undoubtedly the sanctuary of Sant Salvador. Sant Salvador sits atop a hill that shares the same name, with stunning views of the surroundings. The location is very strategic, and has been useful during various historical periods. During the Muslim period here lay a fortification called Almundaina in which there was a mosque. When Catalonia conquered Majorca the fortification was taken over and the mosque converted into a Christian temple.

During the 1300's the village used the temple as a hospital during the plague, but it was burned down after this. This was presumably done to prevent further outbreaks of the disease.

In the 1600s, Sant Salvador was used as a refuge for the population when Mallorca was plagued by pirate attacks. Over the centuries, various things has been added (like the two towers), but most of the building is built in the Renaissance style, and has been carefully restored over the years. If in Artá one should definitely come up here, if only just to enjoy the view. Below Sant Salvador you will find La Iglesia de la Parroquial Transfiguración del Señor (try saying that three times fast!), which simply translated means “The parish church of the Transfiguration of the Lord”, with a nice view of the village. The church was built in Neo-Gothic style in 1573, to replace the primitive church from the 1300s, which had become too small. The construction continued until 1816, when the clock tower was completed. The church has two entrances. The main entrance was designed by architect Bartomeu Ferrà during the 1800s, and here you can recognize the influences of modernism in the ogival shape of the port and the beautiful rose windows. The second entrance is from the 1700s, known as "Dels Homs" (which means Men in Catalan), is unfinished. This makes many jokes spring to mind about spanish men and their "mañana-mañana" mentality (since the door is still unfinished).

The church is named after the altarpiece, which represent different parts of the Lord's Transfiguration. Inside the church we find no less than 14 different shrines, and stunning windows made of colored glass, which really comes to life when the sun is shining, which is about 300 days a year here in Mallorca.