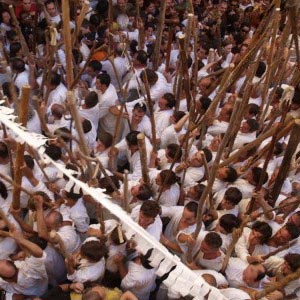 You have surely already heard about many of the different fiestas that take place all over Spain. You are most likely familiar with the famous “Sanfermines” in Pamplona where the bravest (or craziest) run in front of bulls (the so called “encierros”) or with “La Tomatina” fiesta in Buñol where more than 45000 people throw tomatoes at each other. Today however we are going to talk about the “Moros y Cristianos” fiestas in Majorca.

In the pretty village of Pollensa, situated in the northern part of the island, every year on August the 2nd the Christian victory over the Moorish pirates is commemorated. Back in the year 1550 and more specifically on May the 30th Moorish pirates led by the evil Dragut invaded Pollensa. To celebrate this victory, part of the people dress up as Christians wearing white clothes and sandals and another part dress as ferocious Moorish pirates with their faces painted in different colours, covered in necklaces and dressed colourfully. Moreover, both parts are equipped with handmade weapons; the Christian village people with wooden sticks and pitchforks and the pirates with large swords. The two groups take part in a reconstruction of the battle and the result is always the same: the Christian villagers win and the pirates loose.

This commemorative day begins as early as 5 o’clock in the morning when the music band plays the popular song “Alborada”. The celebrations continue with a mass at 11 o’clock honouring the patron of Pollensa, la Mare de Déu dels Àngels, followed by the typical Majorcan dances “los cossiers”.

And then, later in the afternoon the real action begins! As a first act, Joan Mas (the Christian leader) standing on the L´Almoina square, shouts out a sentence where he asks the Virgin for help as the pirates have arrived and the battle is about to begin.

After this cry for help, the much awaited meeting with Dragut and the rest of his Moorish pirates occurs and the battle officially commences. Several clashes take place in different parts of the village, ending with a final battle on the village´s old football pitch. One more time, as every year, the Christians win against the evil Moorish pirates.

After the victory, Joan Mas takes the pirates´ flag and goes together with the rest of the Christian villagers to the village church where they sing thanking the Virgin for their victory. The day ends on the Plaza Mayor (the village´s main square) singing the Alborada song and Pollensa´s own song and with fireworks.

So now, knowing all this, you can come to Majorca not just to play golf but also to take part in this fun “Moros y Cristianos” fiesta.