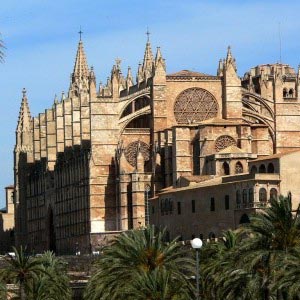 One of Palma's most distinctive landmarks is the magnificent Cathedral La Seu. Although the cathedral is incredibly central, and is one of the buildings that really stands out when you let your eye sweep across the skyline, there are many who only seen the outside of this stunning cathedral. Below the cathedral there is a small park with a fountain, and a swan pond that is relaxing to stroll around in, and provides a harmonious feeling with the rippling water and the lush greenery that surrounds one. But despite the cathedral's exterior is very beautiful so it cannot be compared to the inside. History says that King Jaime the First (also known as Jaime the Conqueror), was involved in a terrible storm at sea on his voyage against Mallorca. He prayed to God that he would save him and his men, and if he would survive unscathed by the storm, he would set up a magnificent church in honor of the Virgin Mary. On New Year's Day in 1230, when King Jaime defeated Palma, and its former Arab population, as was the first foundation stone of the cathedral lain, symbolically of the place occupied by the city's largest mosque. Work on the cathedral continued for 400 years - and had to be resumed in 1851 after a large earthquake shook down the front part of the western side of the Cathedral. More details were added during the 1900s by the famous Catalan architect Antoni Gaudi, who is primarily known for having left his architectural mark in Barcelona, including Parc Güell and the amazing church of La Sagrada Familia. In 1931, La Seu was declared a historic monument.

As a visitor, you enter through a side door, and through a small museeum where the Cathedral showcases various valuable items donated and used in previous fairs. It's an impressive collection, so do not miss the gigantic candelabra in silver or Saint's relics. Add some time to explore the details of the ceiling and walls. The cathedral is incredibly detailed, and particularly the smaller rooms which is located in the museeum. When one enters the cathedral, the first thing you notice the space. It is so great, and you feel so small. The second thing you notice is the amazing windows, and perhaps most of the large bow window. This is one of the world's largest rose window, then it is 12 meters wide, and consists of not less than 1236 pieces of hand-colored glass. When the sun shines in through the window, it's hard not to get at least a little religious. Are you interested in Gaudi's work, it's at the altar you should look. There hangs a huge chandelier made of wrought iron designed by the architect. One of his more controversial works, "Crown of Thorns" is suspended above the altar, and is only made of cardboard and cork, which you do not really believe when you see it.

If Gaudi's controversial work would not be enough to get talk started in and around the cathedral you don’t have to go far. If you have a look to the right, in the right apse of the cathedral, you find yet another renowned and controversial works, this time by a local Mallorcan artist Miguel Barcelo. The entire right apse is covered to a modern work of art in ceramics. Here we're talking about an area of approximately 300m2. If the artwork fits in, if you like it or not, there is disagreement about. The artwork reflects the evangelical story of the multiplication of loaves and fishes and the wedding at Cana (where wine turns into water). The largest focus is however on the symbolism of the Risen Christ. We advise visitors to the cathedral to think about how they are dressed before they decide to enter the cathedral. With respect for the Catholic religion, and the people inside the church who are not there as a visitor, but as practitioners of the religion you should look clean and tidy, and have covered shoulders. Photography is allowed, but not with flash. Visitors received during weekdays and Saturdays, but are not permitted on Sundays.